Spring in Alaska isn’t what everyone else is used to, myself included. We still have a lot of snow. With all that snow though, comes lots of sunshine. It starts to get warmer and the days are longer so outside activity is actually really enjoyable. I would still love to see all those flowers poking up and the grass greening up. But until I get to see this soon

I’ll do myself some good and enjoy playing in the snow.

Andy’s been really pushing to go hiking lately. I’ll admit I’ve been a bit of a Debbie downer on that idea because Hayden is to the age she no longer fits in a pack, and the stroller won’t really work in the snow. After much assurance from Andy that she can hold her own, we planned a few trips.

The first day we planned on hiking was actually a pretty gloomy day but was one of the warmest days of the week. We picked a trail that wasn’t far from home and decided that we would bring a buddy with us. Meet Jazzy. 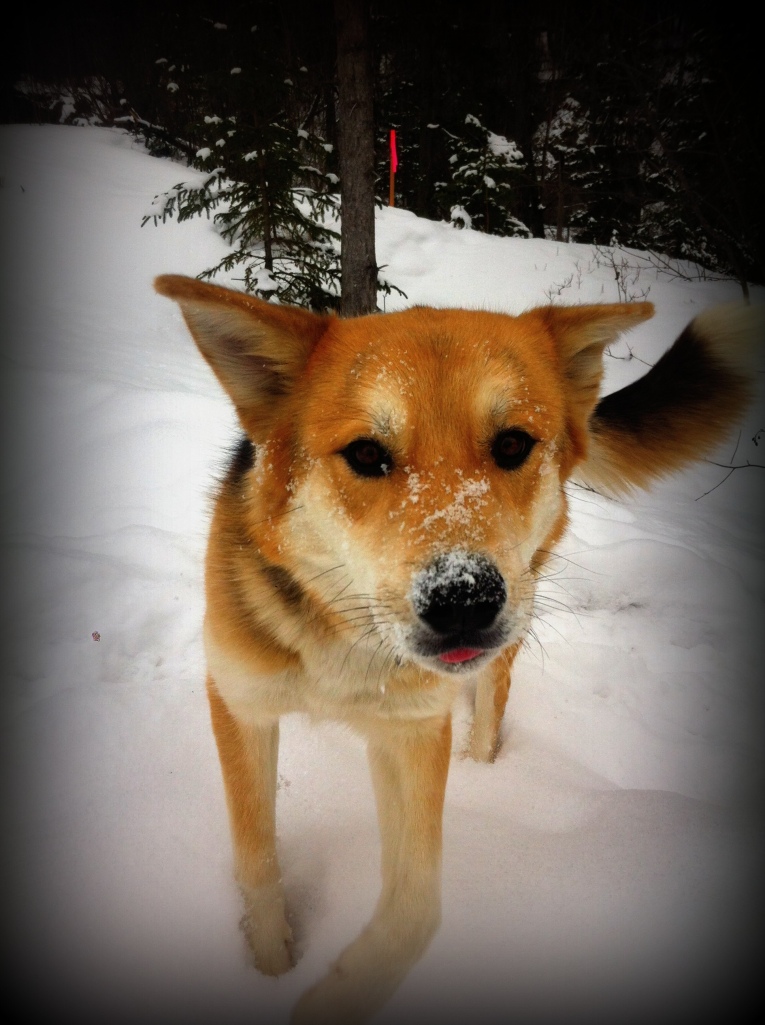 She belongs to Andy’s niece Matty. She’s still a pup, but she’s such a sweetheart. We thought she might enjoy getting out of the kennel for the afternoon. Hayden was beyond excited to help and really wanted to carry the leash. 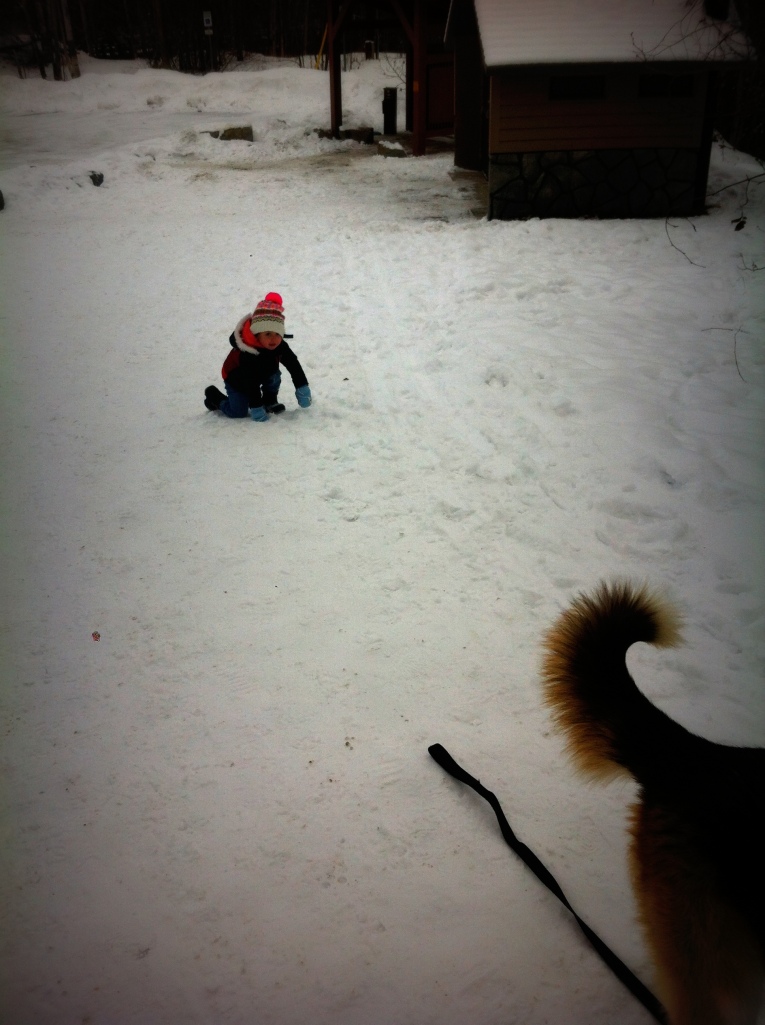 The trail was well groomed and Hayden did fantastic at walking by herself. With the exception of the hills, she figured out quickly those are hard and always wanted a free ride up them. I think the signage scared her. 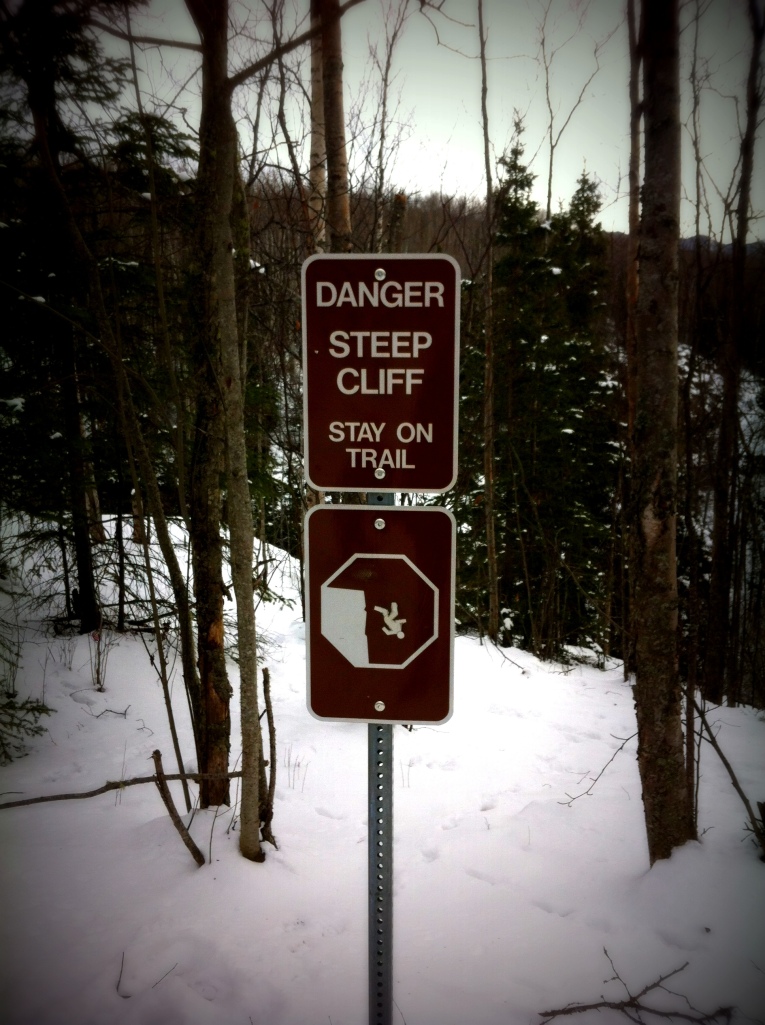 The trail we stayed on wasn’t long, and we made our way to our destination, the frozen falls. We attempted at some pictures with the whole crew and we learned fast that it’s a lot harder than one would think. We nailed it as you can see. 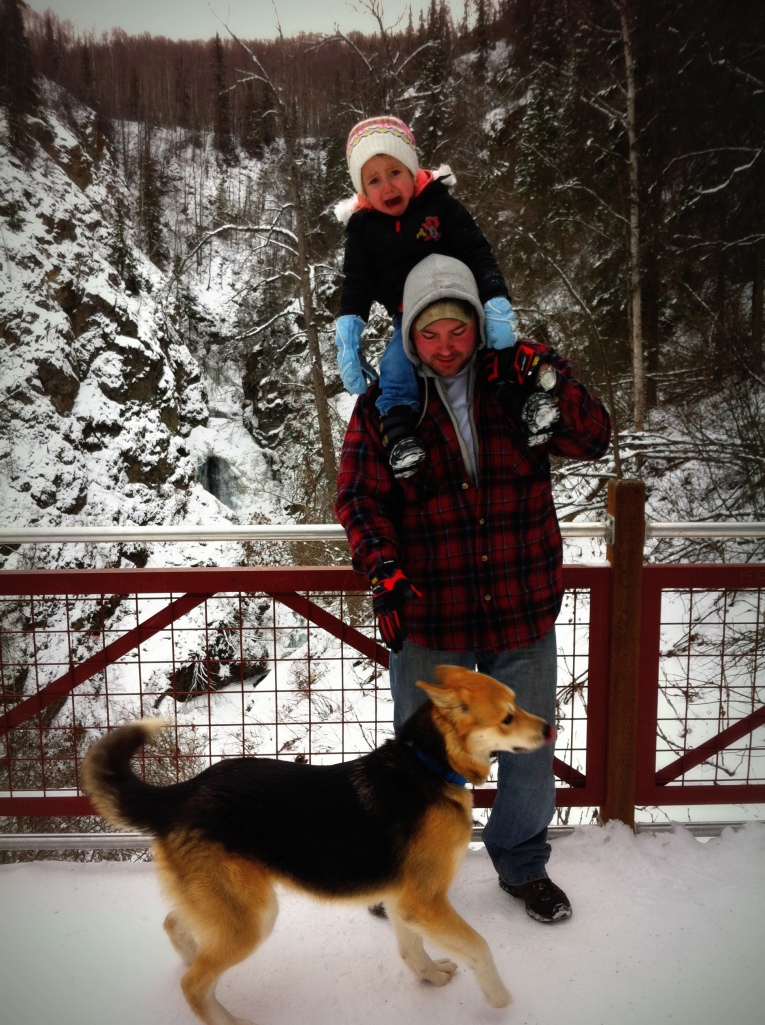 The overcast day was still a successful one for an outdoor adventure but I think the furry one enjoyed it the most.

The weather the next day for hike number two was definitely in our favor. Remember way back when I said there is a place here I’m certain unicorns exist. This is it. Only in the winter. I want to say unicorns fly to somewhere in the tropics during the winter months. That’s just a guess though.

We came prepared for this hike. We figured someone’s little legs would tire out quickly. We assumed correctly. 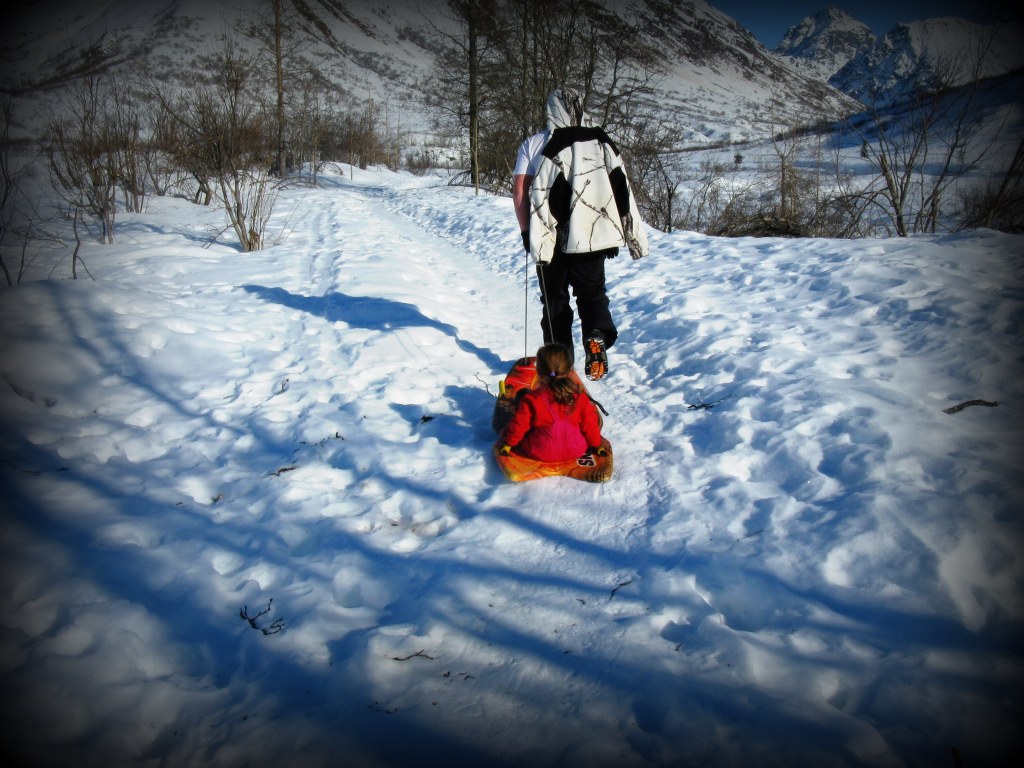 Now anyone that knows me, knows that I always pack snacks. ALWAYS. This day was no different.

Who doesn’t love a giant sandwich?!

Once our bellies were full, Andy and Hayden worked on building a snow castle and I supervised. With my eyes closed.

I did get up long enough though to venture in the IGLOO we found! I can’t say that it was authentic eskimo made, but whoever built it did a pretty legit job. 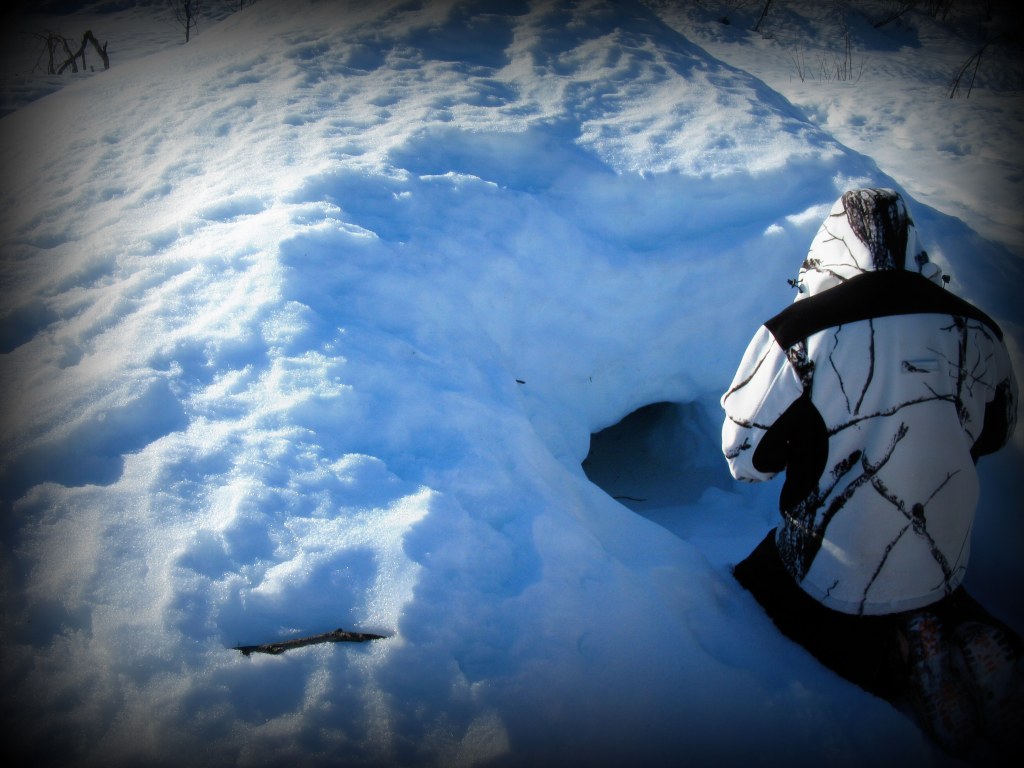 We spent more time just enjoying the sun than actually exercising, but Vitamin D is a big deal around here. We packed up all our stuff, and after a complete meltdown by the 3 year old we managed to make our way back to the Jeep. I’m not going to lie, I took a free ride part of the way.

Hayden got her fill of jumping in muddy puddles in the parking lot while we loaded up all the wet clothes. The sun was still warm and inviting so the rest of the afternoon was spent driving up the rest of the pass. We stopped to take a gander at the people who had more motivation that we did. 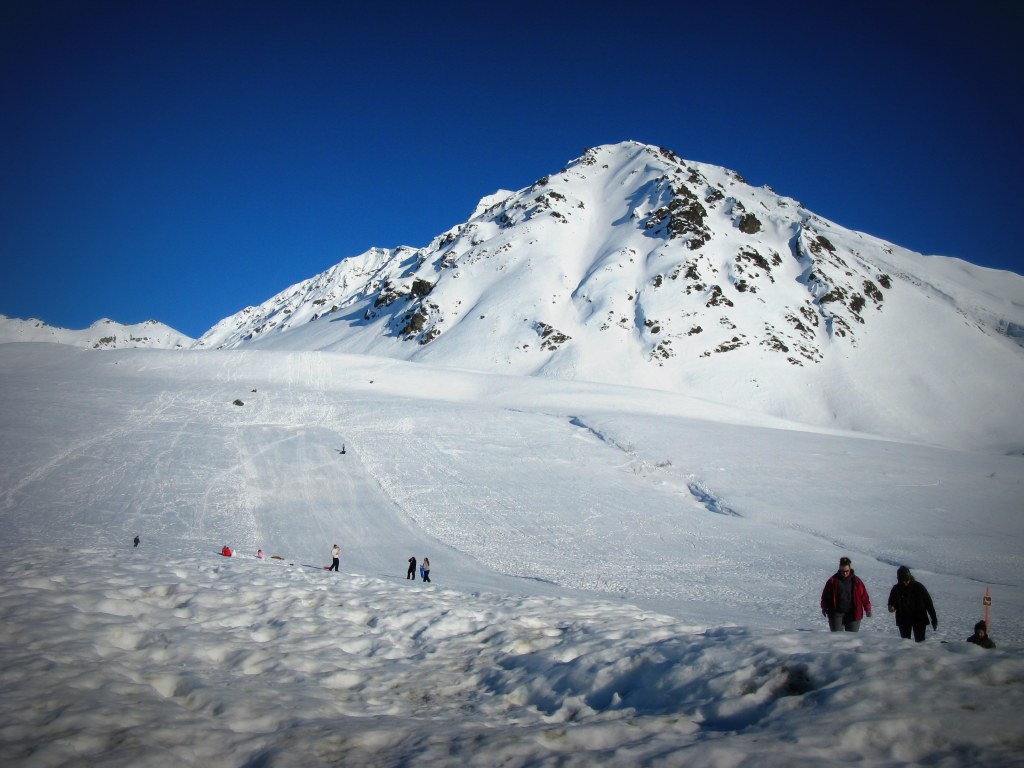 Days like this are ones I try my best not to take for granted. I find myself occasionally wishing time away, hoping summer was here. Trips like these are a good reminder that blissful days come in all forms, even cold wintery ones.

One thought on “a day with a dog and an igloo”