Spring in Alaska is known as breakup. It’s literally what it sounds like. After months of snow and ice building up, the weather warms up, the days become longer and longer, and all that is left of winter starts to melt away. Rivers that were frozen over begin to break and flow again. The inlet becomes a traffic jam of massive chunks of ice that have traveled their way down.

Even though it’s not even February, and spring is far off in the distance, Saturday felt like the turning point. We have had a spike of warm sunny weather lately, and it couldn’t have come at a better time. It seems like all we’ve had lately is never ending gloomy sunless days. It starts to wear on a person.

Yet, all our snow is starting to melt. Most roads are bare. Yesterday it hit 50 degrees. 50! It felt amazing.

People’s green lawns are starting to poke through. My neighbor’s dog was out barking and scavenging the yard. I swear he was hibernating. And I woke up and opened my door to take this beautiful scene in.

You hear so often, you don’t realize how much you care for something, until it’s gone. Sunlight definitely falls into that category. We don’t live in a part of the state that has total darkness for any period of time, but we do have several weeks that have extremely short days. Every so often, those days are just over cast and grey.

The happiness that fills you when the sun returns is almost unexplainable. I took it all in, as much as I possibly could.

My plants took a vacation from artificial light and got to enjoy the real deal. They look happy. To me anyway.

My house in general feels like a season is changing. The Christmas tree was taken down and stored and replaced with a tent. Not a teepee, as my toddler corrects me every chance she gets. Not a teepee mom. TENT.

All the holiday decorations have been boxed up and put away for next year. My shelves are finally unclogged and free of Christmas spirit. (I’m totally that person that decorates earlier and earlier each year, so by the time Christmas rolls around, I’m just OVER IT.) 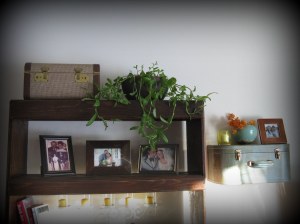 Andy and I laid a sidewalk and patio this fall, what seemed like only a matter of days before it snowed. So we haven’t seen it in months. With the exception of a few patches of ice, it’s looking rather appealing. I might just head out for a picnic soon. 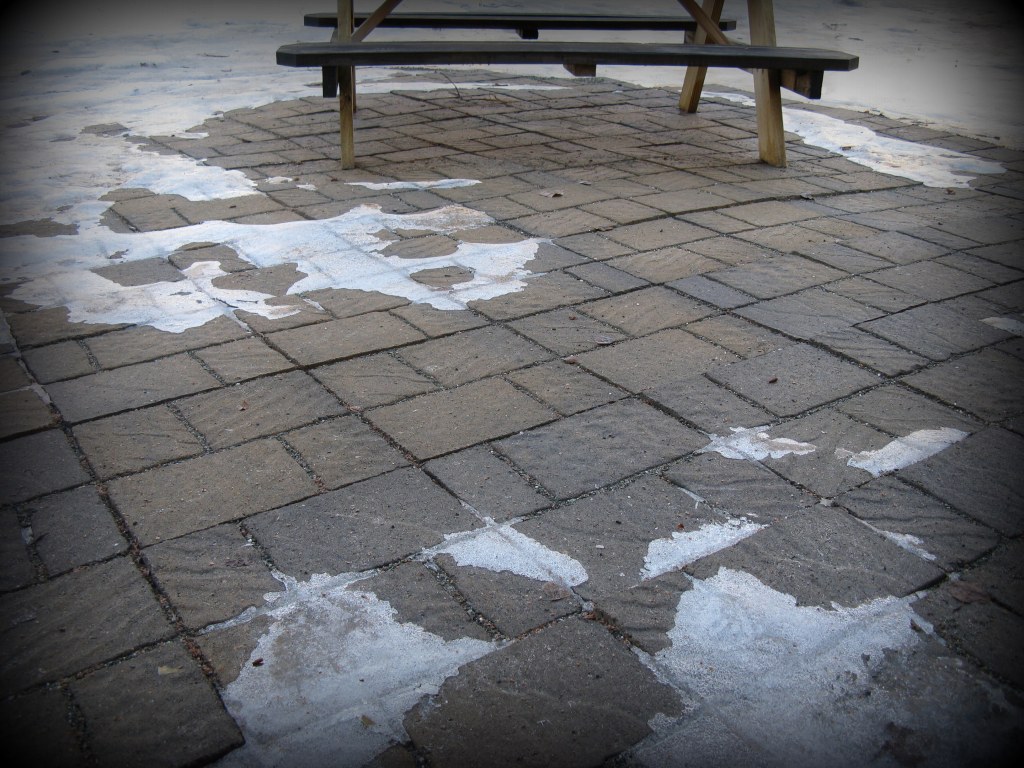 My favorite part about our faux spring. My boots are getting the boot. Hayden and I had errands to run. She was adorned in a cute little sun dress. I, of course, went with the cropped pants, my ankles need some fresh air people! A little floral to brighten the mood, and last but not least, FLATS! No socks. Socks are my frienenemy. I need them occasionally, you know to prevent fungus or blisters or whatever, but I really loathe them. 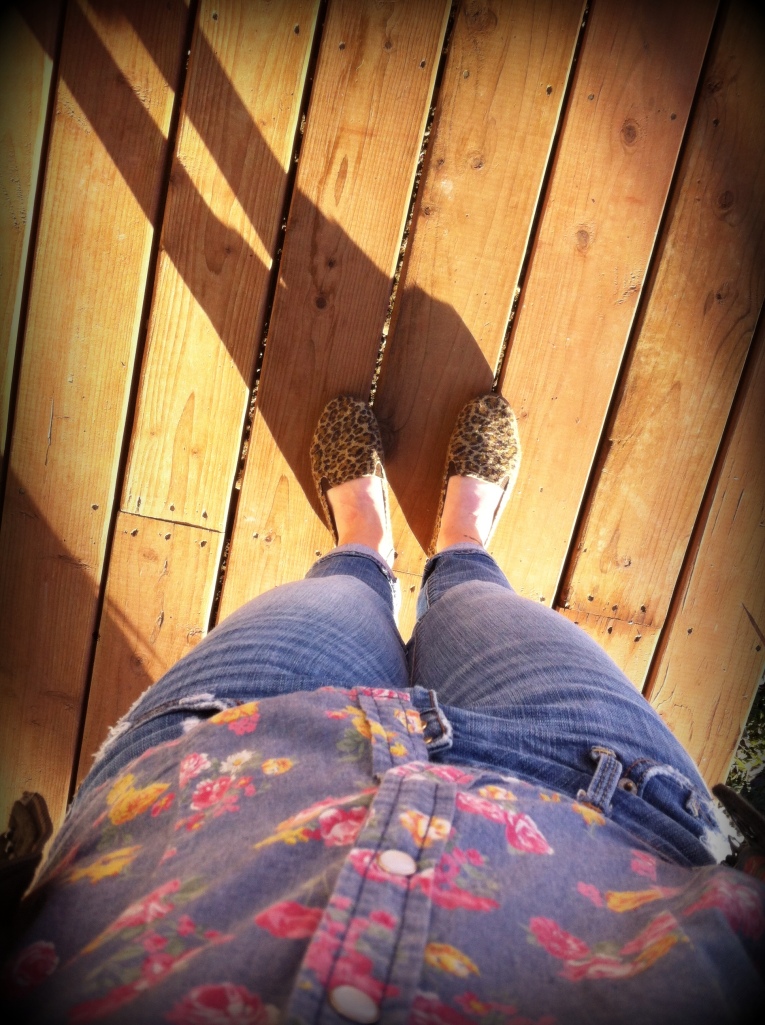 Hayden wasn’t fooled by the sun. There was still snow. She opted for a hat as well.

We baked on the front porch for a bit, soaking in as much of that glorious Vitamin D as we could. My flower beds were doing the same.

We did our errands and enjoyed the sun shining on us through the windows. It was short lived for Hayden and she was fast asleep by the time we got home. With her snoozing the rest of the afternoon away, I took to unloading the groceries. Only to find that I wasn’t the only one basking in the spring like weather. Our favorite furry friend was getting his fill too.

I luckily had a bag of carrots to share. The weather is getting nicer, but don’t be fooled, it’s still just dead sticks out there to eat. He polished those off and came back to see what else was in the fridge. 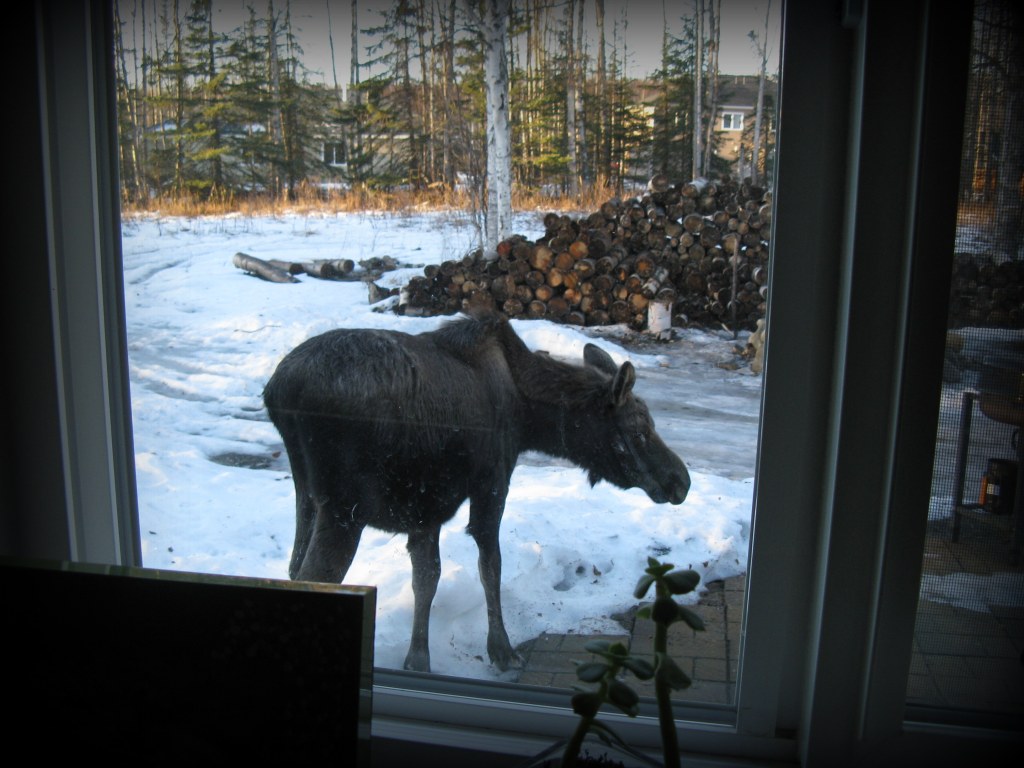 I was making spaghetti, but had an inkling it would go untouched if I shared. But hey, maybe that’s where the story If You Give a Moose a Muffin, came from. She probably ran out of carrots too.

It really still is winter though, so the reality set in and by 4:30 my sun filled Saturday was coming to an end. The sun had already set and night time was upon us again. Everyone on the radio and the news keeps saying that it won’t last. More snow is ahead of us, winters not over, don’t get your hopes up, blah, blah, blah.

But I woke up this morning, and the sun is starting to sneak through the morning clouds and it’s already close to 50 degrees and not even 11 am yet.

Faux spring, stay as looooong as you want.